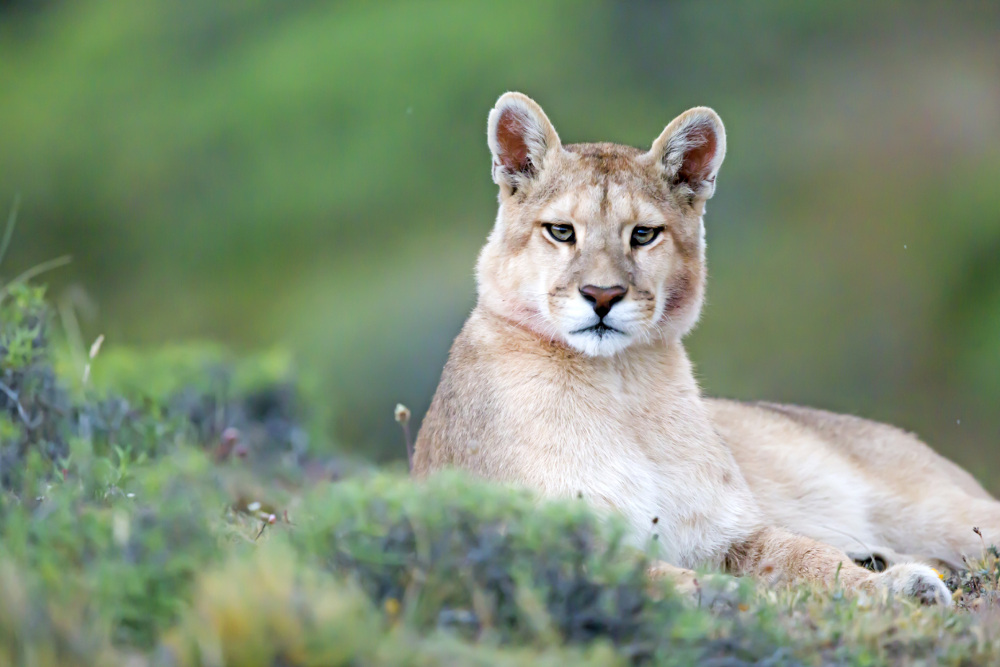 TRAVEL BLOG On The Prowl In Patagonia

Fast as lightning, a black silhouette shot across the shoreline of Lake Sarmiento. It was too large to be a grey fox and too small to be a guanaco, the curious llama-like creature that roams these lands.

It was only my first day in the Torres del Paine National Park, a wild portion of Chilean Patagonia that's lavished with towering glaciers, snow-clad valleys and dramatic peaks. A sighting of this size was simply too lucky. Even if it was over in a flash.

Taking in a great swathe of Chile and Argentina, running along the Andes and down to where South America flicks its tail towards Antarctica, Patagonia defies easy definition.

It was Portuguese explorer Ferdinand Magellan who first documented the area in 1520, during what became the first circumnavigation of the world. Magellan and his crew described seeing "patagones" on the coastline – naked men who stood like giants, double the height of normal human beings.

The fallacy pervaded for centuries, until later explorers encountered the real Tehuelche tribes and decided they were, in fact, of completely normal stature. But the seed had been sown and early maps of the New World continued to mark the area as regio gigantum (region of giants).

While other intrepid travellers come to Torres del Paine to tackle the formidable "W" circuit – an extended trek that links five key points in the national park over several days of scrambling up and down mountains – I planned to take a more leisurely pace, ensconced in the back of a chauffeur-driven van. My goal? To spot Patagonia's rare big cats and other endemic wildlife.

Searching For The Hunters

The tour is run by EcoCamp, a carbon-neutral retreat of 25 geodesic domes, which stands at the foot of the park's top attraction: the Cordillera del Paine.

This twisted chain of granite and basalt mountains soars up from Magellanic forest, a type of woodland particular to this southermost section of South America, and from the Patagonian steppe, a semi-arid desert dominated by shrubby plants and glacial lakes.

Its highest summit is the Cerro Grande, which tops out at 2,884 metres, but even more dramatic are the twin devil-like Cuernos – or horns – and the three cathedral-like spires that give the park its name: Torres del Paine (Towers of Paine).

As we gathered around a fire on the first night at camp, rumours of recent puma sightings abounded. A mother and her cubs had been spotted in the valley days before; a lone male had been seen casually strolling across the camp's wooden walkways.

Hoping to see wildlife? Where The Wild Things Are: Animal Encounters

Just how amazing is it? Andean Splendour

But by far the most startling tale came from the Hotel Las Torres, a collection of low-rise, luxury log cabins, just down the hill. During the off-season, when the hotel was closed to guests, a young puma cub had found its way through an unlocked door and into the bar, only to be discovered a few days later by an unsuspecting member of staff, eating its way through a stash of jamon serrano.

This was strangely encouraging news, but with only 50 of these elusive cats in an area roughly the same size as Wales, there were still no guarantees.

Having made my selection the night before from a range of activities on offer at the camp, the next morning found me driving through a series of lakes in the company of Felipe, before mountain-biking through the eastern side of the park in the afternoon.

As we drove into the Patagonian plains, long-legged guanacos grazed amid the grassland, lifting their heads quizzically as we passed. Overhead, majestic caracaras carved black shadows against a brilliant blue sky.

Stopping beside the viridian waters of Lake Nordenskjold, Felipe explained the reason for its piercing blue-green pigment. "It is filled with melted glacial ice, which picks up colour as its runs down the mountains."

Andean condors swirled above, their flight so low I could see their red turkey-like heads, their wingspan – I was told by Felipe – reaching up to three metres in the larger males.

At Lake Sarmiento, oystercatchers and black-faced ibis squawked as we approached and elegant ostrich-like rheas pranced past like prima ballerinas, flashing their feathered tutus.

It was only as we drew closer, that I wondered if perhaps they weren't running from us. The flash of a puma's shadow across the shoreline sent a bolt of excitement through us. But I suddenly felt vulnerable, out there in the wilderness, with nothing but a stick to defend myself.

"There has only been one fatal attack in the park," Felipe reassured me. "And that was a fisherman. The puma came for his catch, not him. But when he ran ..."

Apparently, the best thing to do is stand completely still, but I hoped I wouldn't have to put the theory to the test. Pumas are, of course, more hunted than hunters.

Gauchos – the cowboys of South America – can command large sums of money from wealthy farmers for killing them in order to protect livestock, despite it being illegal within the national park.

After a hearty barbecue beside the Blue Lagoon, it was time for two wheels. Hurtling down unmade mountain roads at breakneck speed, past the milky green glacial flow of the Paine river, I was more focused on staying upright than spotting pumas, but I returned to camp exhilarated and utterly exhausted.

Over the next few days, the pace picked up steadily. There was a walk up to the Mirador Cuernos, through silent valleys of grazing guanacos, to a startling lookout towards the horns, where the sudden thunderclap of a distant avalanche was the only disturbance of the peace.

We strolled through slopes carpeted with yellow paramela bushes and crimson neneo shrubs (whose flowers always point south, like the perfect Patagonian compass).

We disturbed a group of 10 condors picking over the remains of a fresh kill, a patchwork of muddy skid marks speaking of a fraught struggle hours before.

We watched herds of horses gallop past isolated estancias (farms), whose red, corrugated roofs imbued the landscape with an oddly Scandinavian quality.

We crept up on caracara nests, woven from twigs and lambs' wool, in low-slung trees. And we hiked amid ancient, lichen-covered forests where Chilean flickers (woodpeckers) and austral parakeets marked our passage.

It was here, as we walked through woodland aglow with yellow baubles of fungus – nicknamed "farolito Chinos" (Chinese lanterns) – and grotesque cow carcasses, victims of the harsh Patagonian winter, that Felipe suddenly spotted a ball of something hairy.

"Puma poo!" he gestured eagerly. I found it hard to summon the same enthusiasm. "Like all felines, they lick their fur, so you can always tell." But the big cat responsible refused to show itself.

The final day demanded layers of thermals, before embarking on a boat ride to the Grey Glacier. Set within the Southern Patagonia Ice Field, which takes up the entire western side of the national park, it is the largest of four glaciers in the Torres del Paine.

The wind howled as we approached in a tiny tourist boat, across the churning waters of Lake Grey, scattered with ruptured blocks of ice as big as houses.

Split by a mighty rock island, the glacier consists of two bulging arms of ice. Sapphire-blue shards shot upwards in all directions, some showing perfect archways of ice, others jagged like flanks of broken glass.

Rising with the sun on my last morning, I bade farewell to the camp and drove out of the park. The light danced on the dusty folds of rock that rose all around me.

I scanned the hills in the hope of spotting something come to life. The closest I had come to seeing a puma may have been a fleeting glimpse and some hairy poo, but I realised it mattered little.

For my search had made me study every crag and cave, bush and boulder in this vast, ultimately unknowable land of giants, all the more intensely.

This article was written by Laura Holt from The Independent and was legally licensed through the NewsCred publisher network.