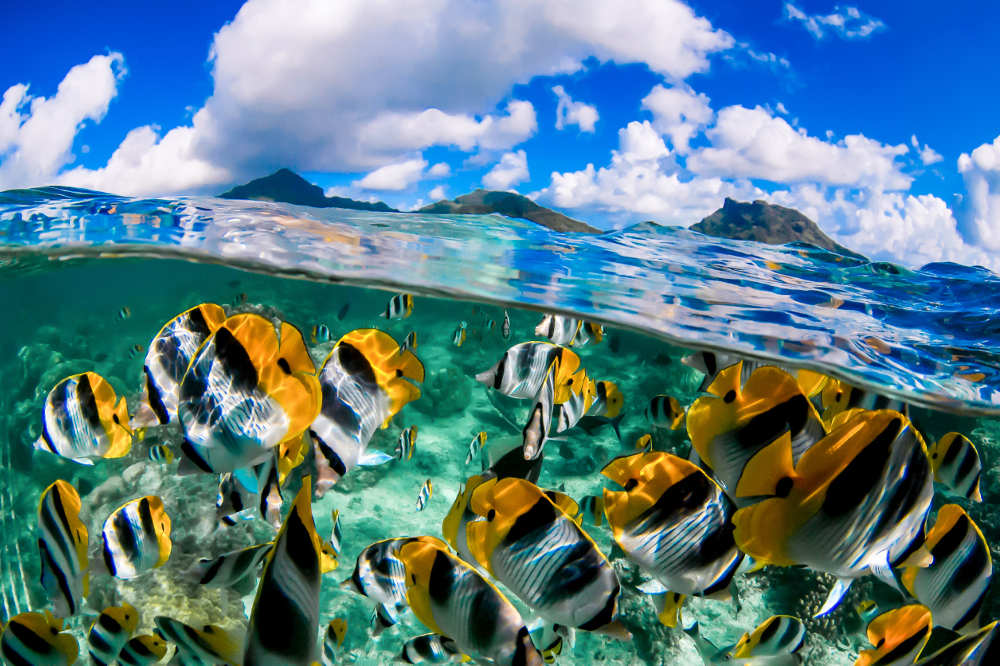 "Bora is boring." With a Gallic shrug, Thibault, the manager of the chic new gourmet restaurant on Moorea, Le Coco's, dismissed the island that has been enticing honeymooners to its reef-wrapped sands since the first resort was built in 1961. Bora Bora, a byword for a Garden of Eden tropical paradise, has style in spades but no substance, apparently.

Within its ring of coral reef-fringed resorts, time seems to have a dream-like quality as visitors gaze soulfully into each other's eyes, wander across silken sand, paddle a turquoise sea – and not much else, or at least that was the gist. Not that I would know.

I was bypassing Bora Bora's romantic torpor for an adventure-packed, culture-laced trip to three other French Polynesian islands: Moorea, Taha'a and that other bucket-list fantasy, Tahiti. French Polynesia's 118 islands are sprinkled like confetti across an area the size of Europe – 5.5 million square kilometres of ocean – and clustered into five archipelagos: the Society, Tuamotu, Gambier, Marquesas and Austral islands.

Tahiti, Moorea and Taha'a are part of the 14-strong Society archipelago, named by Captain Cook in the 18th Century. Now, as then, they tick all the traditional paradise boxes: palm trees, white sand, turquoise water, Finding Nemo on a loop beneath the surface.

Visiting French Polynesia? Where To Stay

You don't have to laze around: The Adventurous Side Of Bora Bora

After crossing half the globe rather more swiftly than Cook, I was greeted at Tahiti airport with a garland of intoxicatingly heady tiare flowers. This is the place that seduced the likes of Paul Gauguin and, more recently, the late Marlon Brando, who bought an atoll, Tetiaroa, after filming Mutiny on the Bounty there in the 1960s. Last year, it opened to guests as The Brando resort.

Tahiti itself, however, is often just the jumping-off point for misty-eyed honeymooners. But, those who bypass it are missing a trick. The rugged, volcanic interior is straight out of Jurassic Park. You can climb to the top of Fautau'a waterfall, cascading 135 meters through a series of basins, or scale Mount Aora'I, a full-day trek around eight hours – or two days if you bed down in the mountain shelter.

I started gently, with a half-day hike through the verdant Orofero Valley. My guide, Herve Maraetaata, was armed with a machete, a bandanna on his head, his body covered with intricate tattoos – the story of his life etched across his skin.

Tattoos were banned in 1819, along with dancing, music and the worship of Polynesian gods – those missionaries and settlers were a liberal bunch – however, many of the traditional customs have since been revived.

With his machete, Herve cut walking sticks to help me ford rivers as we tramped and slithered through this isolated valley, the slopes a tangle of thick vegetation, waterfalls rippling through the greenery. Hacking at sugar cane stalks for me to suck, he pointed out coffee bushes, once farmed here, as well as tomatoes, oranges, pineapples and chillis, before digging up a ginger root for me to taste.

If you got lost here you could easily survive on fruit – although you might be attacked by wild boar, whose tracks Herve pointed out in the earth.

As I scrabbled through the undergrowth he wove tales about his ancestors – the first settlers who arrived here from South-East Asia in large canoes, his grandmother who could diagnose and treat sickness using nature's pharmacy.

He pointed out the giant roots of a Tree of Life (the banyan tree, or tumu ora in Tahitian) among which mummified bodies were once buried, and the kava plant, the roots of which, when chewed and mixed with saliva, produces a drink with a hallucinogenic effect that was once used in traditional rites.

This is a Tahiti not seen by the cruise ships docking in the capital, Papeete. They come for a whistlestop tour of the island's colonial heritage and a grass-skirted, cocktail-laced show, ticking off the home of Mutiny on the Bounty author, James Norman Hall, before sailing on.

Hall's low-slung, green wooden house just outside Papeete, is worth a detour, however. Tahiti cast its spell over Hall, who, arriving here in the 1920s to write travel articles, fell in love with, and married a Tahitian woman. They went on to have three children, one of whom was Conrad Hall, the cinematographer who won Oscars for Butch Cassidy and the Sundance Kid, American Beauty and Road to Perdition and was nominated for six more.

Both men are buried on the hillside behind the house looking out towards Point Venus and Matavai Bay, where Captain Cook observed the Transit of Venus in 1769 and the Bounty memorial marks the place where Captain Bligh dropped anchor in 1788.

Next stop was Moorea, a wind-whipped catamaran ride from Tahiti. Its jagged, mountainous interior delivers another adventure playground, with thundering waterfalls and cliffs to clamber.

The island is less developed than Tahiti and home to just 18,000 people; a single road skirts its coast. I was staying at the Hilton Moorea, a string of thatched over-water bungalows spidering out over the lagoon, blacktip sharks circling each night below the walkways attracted by the lights of the resort.

Happily, they skulk back beyond the reef during the day, leaving me to snorkel in the lagoon with a Disney-style array of tropical fish, try stand-up paddle-boarding, and helmet diving – walking along the sea bed among sting rays.

Back up on dry land, I made a beeline for Le Coco's. The island's first restaurant when it opened 30 years ago, it is now a local legend.

This year, the outpost on Moorea was launched, sleek and stone-clad and dishing up owners' Thierry and Benedict Sauvage's take on bistronomie – bistro style but with gastronomic flavours – and overseen by Thibault, the Frenchman with a low opinion of Bora Bora, but a high opinion of vanilla from Taha'a.

He recalled that when working at the Mandarin Oriental in Paris, he was once asked to make a pannacotta. The kitchen had Madagascan, Tahitian and Taha'an vanilla. He inhaled the scent from each before choosing – and using all of – the vanilla from Taha'a. The head chef almost fainted – it is the most expensive in the world, costing around €300 ($A480) a kilo.

From Moorea, it's a quick flight to Raiatea, 210 kilometres from Tahiti, and then a short boat trip across to Taha'a or 'vanilla island' – a mere three kilometres away and the island with which it shares a lagoon. My base was Le Taha'a resort, on a tiny motu (islet). Arriving as the sun set, I sped towards an angry red sky, Bora Bora looming jagged and black on the horizon.

Le Taha'a is the only 5-star resort outside Bora Bora other than The Brando. It's very different in style, however, from Bora Bora's honeymoon havens. It's a wild, rather than polished, Polynesian resort.

I wanted to get a taste of the island's prized produce and headed off to a vanilla plantation. There are just 6,000 people on Taha'a and 500 vanilla farms. The vanilla here has 14 notes – the strongest aroma is aniseed – because it is allowed to dry naturally for up to two weeks before being spread in the sun for a couple of hours and then in a sauna-style box to sweat. By contrast, vanilla from Madagascar has just nine notes.

The vanilla farm is more of a rustic smallholding, the vanilla laid out to dry on tables in a shed in a clearing surrounded by dense vegetation and other crops such as grapefruit and bananas. Handling the long black pods I could smell the heady sweetness.

"It's the second most expensive spice in the world after saffron," said my guide as I handed over 3,500 Polynesian Francs (around $A44) for a mere 100 grams. "Put a pod in an airtight container with a little rum or vodka in the bottom" was his parting tip.

Taha'a's other claim to fame is black pearls. At the farm I visited, I was given a masterclass in cultured pearls (a small piece of grit or shell is placed in a black lip oyster to form the nucleus, then the oyster secretes nacre on the irritant, creating a lustrous pearl).

Jumping back on the boat, with a bag of vanilla pods and pearls, I motored home to my wild, thatched resort and an afternoon of beachcombing, snorkelling in the tepid turquoise water and lazing beneath a palm tree – anything but boring.

This article was written by Lucy Gillmore from The Independent and was legally licensed through the NewsCred publisher network.