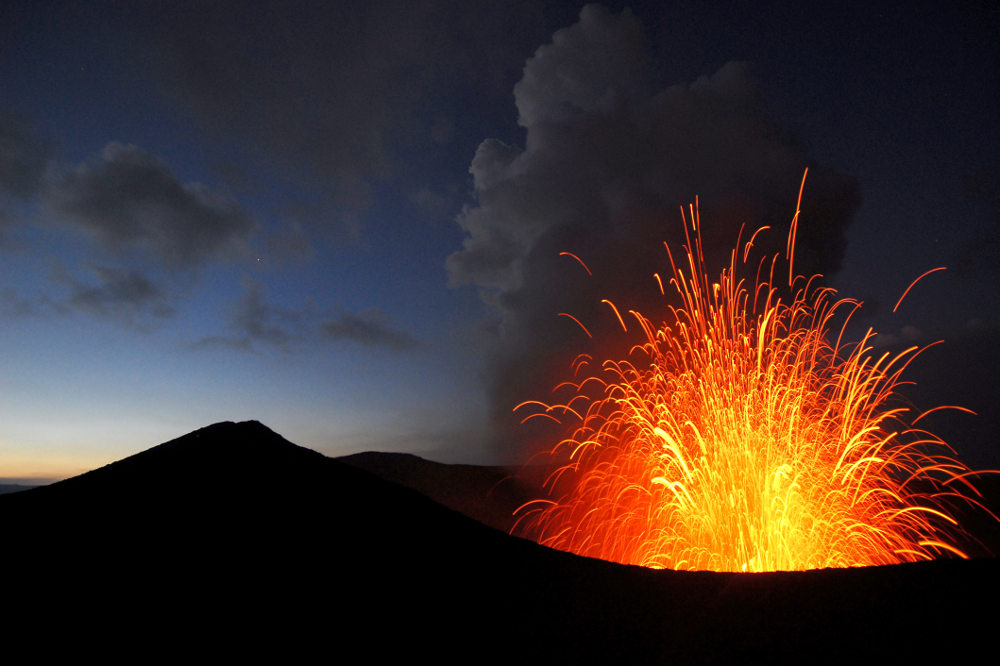 It's constantly hissing, fussing and belching, but every half hour or so Yasur volcano sends up a tremendous spurt of lava and a boom so loud it is deafening on the crater rim and can be heard for kilometres. At dusk, the explosions begin to resemble fireworks, the lava glittering as it falls from the sky.

At just 361 metres elevation, the volcano on the Pacific archipelago of Vanuatu is particularly accessible, and spectacularly active. Some have dubbed it the world's friendliest volcano, although its primal ferocity and occasionally dangerous eruptions of lava and gas would seem to defy that description.

Getting there is an adventure. Yasur is on Vanuatu's southern Tanna island, which doesn't have paved roads and where many of its 30,000 people continue to live as the islanders have for centuries, in simple thatch huts with pigs and chickens running freely.

Legend of the lava

Legend has it that the volcano is a god. Kelson Hosea, who owns the rustic Jungle Oasis bungalows near the base of Yasur, said the story goes that Yasur returned home one day to find his two wives and four sons still at the beach, and in anger turned himself into a pig, before falling asleep.

"When the boys came back home with their mother, they saw the pig and they got angry," he said. "They got angry and they didn't realise that it was their father. They thought it was a pig. And they killed the pig with a stick. And the pig exploded."

He said the four distinct craters in the volcano represent the four sons.

From the Tanna airport, the main transport across the island's rugged dirt roads is by truck. To enter the volcano grounds, there is a 3,350 vatu ($A41) fee.

From the base, it's about a 90-minute hike to the crater rim. There's also an access road, and, for a fee, local drivers will take tourists up, leaving just a 15-minute walk across a rugged, barren moonscape to the rim. There's a lonely postal box near the top marked the 'Volcano Post', where tourists can mail postcards.

Check out some other volcanoes: Big Fun On Hawaii's Big Island

Authorities periodically close Yasur when the eruptions get too violent and it becomes too dangerous to stand near the crater rim.

Yoram Teitler, a geologist who was recently a research fellow at the University of Western Australia, said the volcano had been active for perhaps 2,000 years. It is constantly bubbling, with larger eruptions coming once or twice an hour. Observers can stand about 150 metres from the crater floor.

"It's quite rare to get such a kind of activity in a volcano," he said. "There are just a few examples in the world, and it's requiring the combination of very specific conditions. You need to have a specific viscosity of the lava, a specific amount of gases within the magma. And, as well, a proper plumbing system to trigger such regular explosions."

Teitler said that once people arrived on the rim, it was important to avoid the poisonous sulfurous gases coming from the craters and some side vents by taking a position upwind of them. He said that if the lava did explode beyond the rim, rather than running blindly away it was better to watch where the hunks were falling so you could avoid them.

Vanuatu President Baldwin Lonsdale said the volcano had become a popular tourist attraction and a place where locals could make some money.

"But people have to be very careful when they walk up the volcano," he said. "Because it's very dangerous there."

For those willing to brave the volcano at night, they can see a display that is both spectacular and elemental, one that creates new terrain and connects to the very origins of the planet.

This article was written by Nick Perry from The Associated Press and was legally licensed through the NewsCred publisher network.

Shark Diving In The Maldives