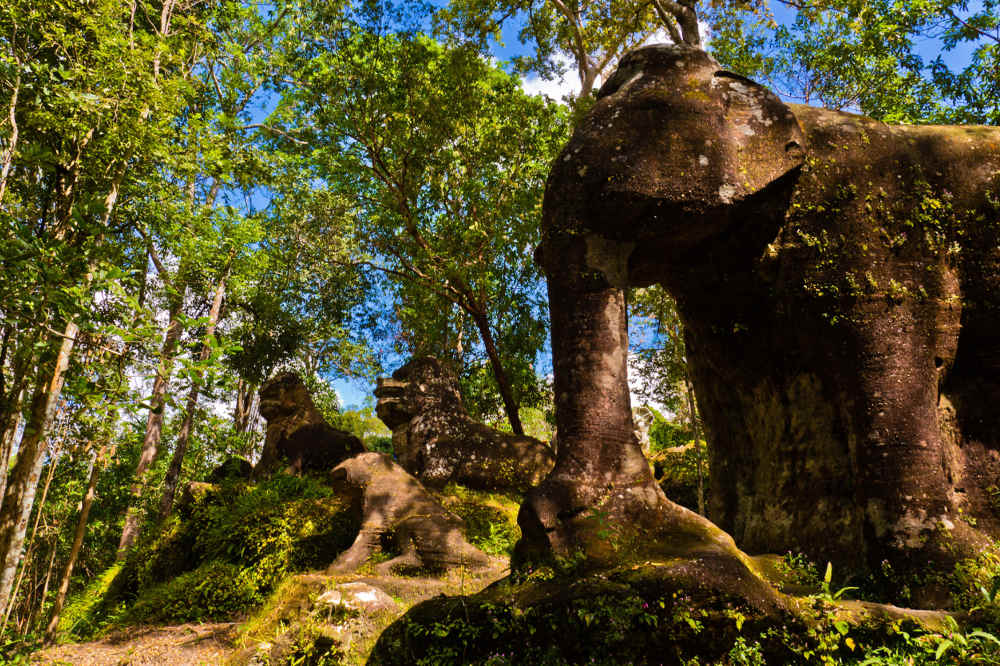 Just how does a modern traveller find an ancient lost city? In the soupy heat of the north-west Cambodian jungle, I chose Lin to lead the way. He was one of several boys on scooters waiting by the edge of a dirt track, surrounded by banana trees and chirping cicadas.

Wearing flip-flops and a blue T-shirt that read 'cosmic', Lin's 110-horsepower Suzuki was my ticket into the black hole of time. We were heading towards the lost city of Mahendraparvata, the sacred mountain site where the reign of King Jayavarman II was consecrated in AD802. From this capital, the mighty Khmer Empire began a rice-rich domination of South-East Asia that was to last for more than 600 years.

More recent times saw a long period when Cambodia's interests were bounced between neighbours, then the country came under French protection in 1863. Cambodia gained independence from France in 1953.

Buried beneath centuries of vegetation, the existence of Mahendraparvata – now commonly called Phnom Kulen – was confirmed to the world in 2013. Some believe it to have been the largest settlement complex of the pre-industrial world. The remnants of the city were revealed by high-tech archaeological research involving eight organisations, six countries and an airborne laser scanning process known as Lidar.

Pre-dating its neighbour Angkor Wat by three centuries, the edge of the city is only 40 kilometres from the two million people who visit those Unesco-protected temples each year. The 'lost city' is new, crowd-free and even more ancient. Suddenly old is new again.

Nobody said it would be an easy ride to get there, though. We negotiated potholes, ankle-deep bogs and one particularly rickety bridge where a plank of rotted two-by-four was all that lay between us and a watery garage sale. Several kilometres on, Lin geared down abruptly and veered off the road.

Both sides of the skinny trail were choked by inky-dark jungle foliage. What was out there was anyone's bet. What was in my head was last night's advice, gleaned in a bar in downtown Siem Reap: "The general rule in Cambodia is to always make sure that you stay on the path."

The sage counsel came from the lips of Stephane de Greef. He came to Cambodia in 2001 from his native Belgium to map minefields, a deadly business in a land where war raged from 1970 to 1998 and Pol Pot considered the invisible weapons his 'perfect soldiers'. More recently, Stephane applied his cartography skills to assist University of Sydney archaeologist Damian Evans on Phnom Kulen.

After months of hiking, digging, plotting and scanning, the analysis finally came through. They had hit the jackpot.

Arranging an ersatz treasure map of chopsticks and salt shakers on the table, Stephane spelt out what 1,000 years of not mowing the grass can do. To get as far as the mapped zone, we would have to ride motorbikes, bushwhack through dense overgrowth and possible landmines and, oh yes, rebuild a bridge taken out by the arrival of the rainy season.

So, when Lin's motorbike ran out of passable track, it demanded full engagement of my Inner Explorer to access even the outer reaches of this mighty metropolis. Who knew urban sprawl was a ninth-century invention?

Slapped by rubber plants, beaten by the odd banana bush, we dismounted for a half-hour tramp to Sras Damrei, a plateau nearly 400 metres above sea level. Through the trees, I spied an elephant sporting a regal moss-green robe: 4.5 metres high and carved 1,200 years earlier from a single sandstone block.

Beside it, two giant lions offered stoic company, ferocious jaws frozen open since AD802. Following their gaze through dark, damp foliage, just beyond a blood-red landmine marker hacked into a tree trunk, a millennia-old city as big as Hong Kong still waited to be unearthed.

Archeologists have already located some 30 temples on Phnom Kulen using helicopter-mounted lasers to measure variations in ground height through dense vegetation, a process Stephane likens to being able to "see the bones without opening the skin". But don't expect your visit to dispense the user-friendly terraces of Ta Prohm or the grand crenellated towers of Angkor: some temples form mounds up to 10 metres high, others Stephane describes as "a pile of bricks".

Excavations of the Khmer Empire city – roads, sewers, temples and houses that formed the capital of South-East Asia's most powerful empire – are just beginning. Any anastylosis, the reconstruction of a monument from fallen parts, is yet to commence. Elephant Pond was as far as we were able to reach on that particular day.

The motorbike trip to reach its edge cost $10. The experience? Priceless.

For the luxury-loving explorer, they'll erect a lavish safari tent camp with cooks, loos and showers, a glamp into the jungly midst of living history fit for a Khmer king. If that's not enough to impress the folks back home, an eighth wonder of the world will be at your disposal as a party venue.

Several of the mysterious, magical temples – including the brooding downcast eyes of Bayon, the lotus-laced moats of Banteay Samre and Angkor Wat itself – can be illuminated and wired for sound for private Champagne-fuelled exaltations. Circuses, string quartets and welcome elephants (minimum of two) can be available as extras.

Another ancient city a world away: Trip Of A Lifetime In Jordan

A muted version of this Buddha-bling made a welcome appearance as we beat a sweaty retreat. Slipping into the sumptuous French-styled Art Deco serenity of Raffles Grand Hotel d'Angkor at Siem Reap, faultless 5-star service unfurled as predictably as a well-oiled ceiling fan. Opened in 1932 for a new wave of affluent visitors to Indo-China and 'the mystery that is Asia' as the literature promised, it has hosted sultans and soldiers in its day.

While a butler unpacked my jungle-soaked kit, a pool attendant requested permission to mist my exploration-wilted body next to Cambodia's biggest swimming pool – a shocking contrast to the period when the hotel housed the Khmer Rouge, and prisoners were encamped behind what are now tennis courts.

A glorious history, a tortured past and recent rebirth. There's plenty of emotional push-pull during the course of a Cambodian day, nowhere more so than in the capital Phnom Penh, where the sturdy visitor can roll several horrors into the course of one traumatising day. Mutely, I stood before a glass stupa displaying 8,000 skulls exhumed from mass graves at Choeung Ek Killing Fields, one of 389 camps that claimed a significant proportion of an estimated quarter of the Cambodian population killed by Pol Pot's regime.

I followed this with lunch at Lotus Blanc. Laced with hope yet appalling in its own way, this restaurant is part of PS – a charitable school that is successfully educating and housing children rescued from living in rubbish dumps. I capped this off with a visit to S-21, a notorious prison of the Khmer Rouge where 17,000 enemies of the state were executed and frangipani blossoms now litter its paths. Here, after a group tour of the cement floored cells, S-21's longest survivor talked to us about his seven years held by Khmer Rouge soldiers.

"Bullets were expensive," said Bou Meng through a translator, explaining how he and others were beaten with rattan whips and machetes fashioned from sugar palm trees. He was spared death because of his talent for painting the portrait of Pol Pot – he used soot harvested from oil lamps and had to first pass a test by painting pictures of Mao and Stalin. Bou Meng held up the final black-and-white, near-photographic image that saved his life.

The impassive, unlined face of Brother Number One stared back. When he lifted up another work, done some time later, Bou Meng's face crumpled. In vivid colour, he had depicted the Khmer Rouge slitting the throat of his wife.

At the end of a long, emotional day, it was heart-lifting to watch lithe young dancers from the Khmer Arts Ensemble perform Cambodia's classical form of ballet. The graceful Apsara dance invokes the female spirit of water and clouds, their wrists and knees, all of their joints, achieving the same artful contortions carved in countless bas-reliefs at the temples of Angkor Wat.

I saw these for myself the next day, on a trip to the temple complex. The most memorable consisted of the nine-headed serpents, the eight-armed Vishnu and the seductive coilings of no fewer than 1,500 Apsara dancers in one long languid row, acting out the Hindu creation story of The Churning of the Ocean of Milk.

It's a dazzling and hugely romantic saga that has lasted for 1,000 years and it's one that the lost city of Mahendraparvata is set to continue. "We were really just not expecting it all," admitted Stephane. "Roads, city blocks, houses. Under rice fields, beneath forests, it's everywhere. This is a revolution."

As Cambodia moves through its most recent incarnations – colonialism, independence, war and revolution – this new discovery starts yet another chapter for the archaeologically inclined traveller. As Stephane says, "We are just at the beginning of the adventure."

This article was written by Leslie Woit from The Independent and was legally licensed through the NewsCred publisher network.